STATEMENT BY THE SECRETARY GENERAL DURING STAKEHOLDER CONSULTATIONS FOR THE SADC MODEL LAW ON PUBLIC FINANCIAL MANAGEMENT, WITH PROSECUTORS INVOLVED IN THE PROSECUTION OF FINANCIAL CRIME AND RELATED OFFENCES Featured 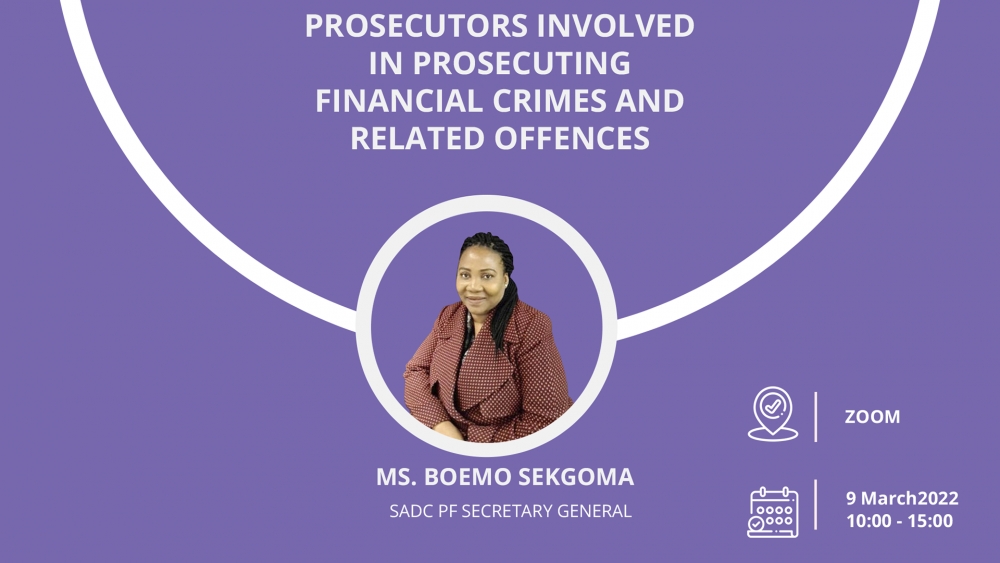 It is with singular pleasure that I welcome you, prosecutors of the SADC region, to this consultative meeting on the Model law on Public Financial Management (PFM) hosted under the auspices of the SADC Parliamentary Forum. As you may be aware, the Forum is the parliamentary arm of the SADC institutional framework, and it is bestowed with the crucial mandate to formulate Model Laws that may serve as guiding yardsticks for national Parliaments.

In this respect, you may recall that prosecutors of the SADC region were equally involved in consultative meetings last year in 2021 prior to the adoption of GBV Model law by the 50th Plenary Assembly of the Forum.

Indeed, elaborate consultations are the cornerstone of the methodology of Model law-making espoused by the Forum. Furthermore, the Membership of the Forum considers that engaging in consultations with key stakeholders is a testament to participatory democracy that is pivotal in ensuring that legislative instruments reflect the actual demands and needs of the SADC citizenry.

Prosecutors of the SADC region have always been considered as eminent stakeholders who are directly involved in the fight against crime. For the purposes of the SADC Model law on PFM, the crimes involved include financial crime, corruption, money laundering, financial misappropriations, to cite but a few. The list goes long and I am sure you will concur that with new technologies such as cryptocurrencies, and other recent developments in the financial sector, the prosecution of financial crime requires the requisite knowledge, skills and competence. No doubt, prosecutors of the SADC region have conducted a tremendous job so far in ensuring the prosecution of financial crime and it is indeed due to your unique expertise that the Forum has deemed it appropriate to engage in consultations with you in view of informing the finalisation process of the Model Law.

At this juncture, I would like to add that we have already consulted with different organisations involved in the State's institutional framework including Line Ministries and departments, AML/CFT agencies, as well as police representatives. The engagement today with prosecutors will thus mark the pinnacle of the consultative meetings held with the Executive concerning the investigation and prosecution of financial crime and related offences.

We firmly believe that Prosecutors are highly relevant to the PFM framework. Prosecutors receive files from the Police and need to make the momentous decision of whether to go ahead with prosecution or not. They evaluate the evidence available and advise the

Director of Public Prosecutions (DPP) who is entrusted with the discretion to prosecute or not prosecute, depending on the tenor of the evidence and the circumstances.

The Office of the DPP also guards against abusive police arrests, detention and investigation, since prosecutors check and verify all collected evidence and take a decision thereon accordingly in all independence and fairness. Prosecutors also appear in bail cases to object to bail of offenders involved in financial crime when there are serious grounds to do so, such as the risk of tampering with evidence or witnesses.

In most SADC Member States, the Office of the DPP is a constitutional function, which means that the position of the DDP is enshrined in the Constitution, and therefore it is entitled to act without the interference of any other person or authority. This also constitutes one of the reasons why we have deemed it appropriate to hold a separate consultative session only for prosecutors so that you may have the leverage to speak among yourselves and engage openly and frankly with the legal drafter.

Today, as lawyers, you are invited to consider the provisions of the Model Law in their entirety, and as prosecutors your attention is kindly drawn to Part 11 dealing with Offences, Maladministration and Enforcement. In addition, you will find that there is also a separate provision governing Offences under Part 16. You may further wish to advise on penalty and sentencing provisions by benchmarking with offences of similar gravity in your national jurisdictions.

You will further note that the PFM Model Law does not cover all the different forms of financial crimes but only the part that deals with PFM. It was deemed appropriate to consider the wide spectrum of financial crimes and offences relating to AML/CFT in a separate instrument to be developed later since at this stage, it was important to keep the legislative focus on PFM. In addition, you will note that provisions relating to prosecution powers have not been included since it is understood that these will already be covered under your respective Constitutions or prosecution laws. Your comments will thus be welcome from the prosecution perspective on the existing provisions of the Model Law, and on whether in your view these can work in tandem with your existing laws and regulations.

I wish to highlight that once the Model Law will be adopted by the Plenary Assembly of the SADC-PF, it will be subject to a progressive domestication process. While we fully recognise that prosecutors are not involved in policy processes concerning PFM, it is expected that prosecutors across SADC will kindly lend their support to push for the domestication of prosecution policy regarding PFM related offences. The rationale is that no PFM framework will stand in a sustainable way unless there are offences that can be enforced as a major deterrent to ensure future compliance.

You will thus be called upon through your national Parliaments to participate in domestication initiatives of the dedicated organ of the SADC-PF, notably the Regional Parliamentary Model Laws Oversight Committee (RPMLOC) in view of furnishing reports or shadow reports on prosecution policy. Your ongoing cooperation in that regard will be highly appreciated in view of ensuring that PFM frameworks are domesticated with the appropriate prosecution policy and sentences that can be realistically enforced.

To conclude, I wish to thank you for attending this august event under the auspices of the SADC-PF. The Forum recognises that democracy depends heavily on the rule of law, which is itself reliant on the respect for law and regulations that is enforced by Offices of the Directors of Public Prosecution across SADC. Prosecuting agencies are catalysts to the respect and observance of the PFM framework, and they are the noble guardians of good governance and accountability. I wish to end by applauding the independent work carried out by prosecuting agencies so far which have made the SADC region a promising land where democracy can dare to make leaping advances, without hindrance or fear of reprisals.

With these hopeful words, I wish you a constructive session in engaging openly and frankly with the legal drafter and other interveners.

STATEMENT BY THE SECRETARY GENERAL DURING STAKEHOLDER CONSULTATIONS FOR THE SADC MODEL LAW ON PUBLIC FINANCIAL MANAGEMENT, WITH PROSECUTORS INVOLVED IN THE PROSECUTION OF FINANCIAL CRIME AND RELATED OFFENCES

More in this category: « Capacity Development Session for SRHR Researchers and Budget Analysis Session Welcome Remarks by the Secretary General (SG), 26th February 2022 STATEMENT BY THE SECRETARY GENERAL DURING STAKEHOLDER CONSULTATIONS FOR THE SADC MODEL LAW ON PUBLIC FINANCIAL MANAGEMENT, WITH CIVIL SOCIETY ORGANISATIONS (CSOS) »
back to top