STATEMENT BY THE SECRETARY GENERAL DURING STAKEHOLDER CONSULTATIONS FOR THE SADC MODEL LAW ON PUBLIC FINANCIAL MANAGEMENT, WITH CIVIL SOCIETY ORGANISATIONS (CSOS) Featured 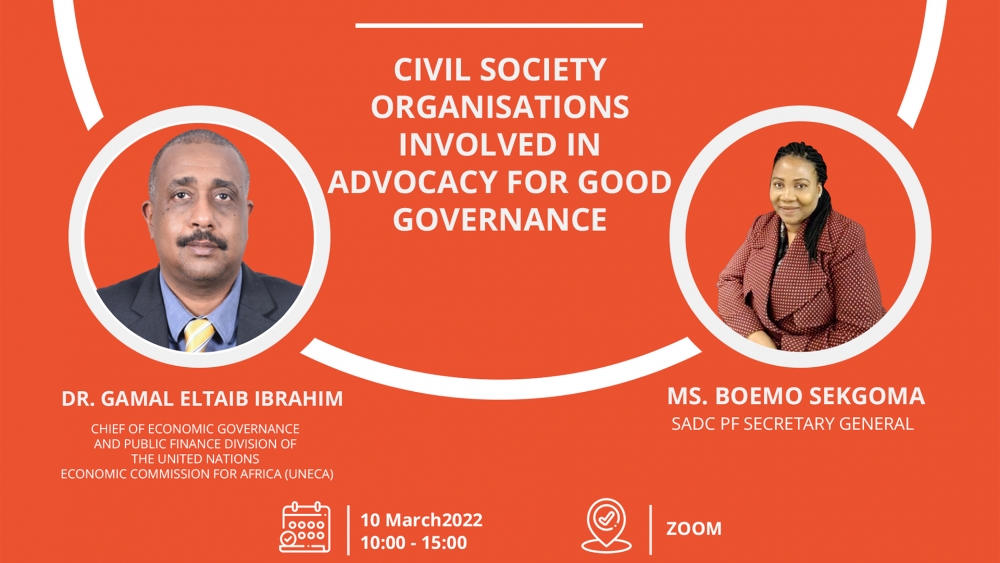 As you may be aware, the Forum is accustomed to holding widespread consultations for its Model Laws under development in view of ensuring that the Model Laws are responsive to the current needs and demands of the SADC citizenry.

The Consultation today takes, place after a series of successful consultations have occurred with SADC Line Ministries, Auditors General, AML/CFT agencies, revenue authorities, police representatives and prosecutors, to cite but a few. However, it was also necessary to engage with private stakeholders which are essentially Non- Governmental Organisations (NGOs) that are not publicly funded and hence have their own perspective on the state of the PFM framework of SADC Member States.

At this juncture, I wish to thank you for finding the time to attend today. The Forum has always held Civil Society Organisations in high regard, and furthermore valued their immense knowledge base, as well as their abundant contributions to State processes. In fact, many of you today already form part of the Forum's Partnership Framework, and we equally invite all CSOs today to collaborate with the Forum beyond the ambit of this august meeting.

I wish to underscore that the ongoing engagement with Civil Society Organisations is necessary since you are in touch with grassroot realities and constantly evaluate national and regional policy on good governance and PFM. You relentlessly work to promote good governance and thus ensure that PFM is kept under the radar.

The Forum also recognises that you are smart players in the realm of PFM and denounce corruption, fraud and bribery on a routinely basis. You follow up on Governmental measures and actions which affect PFM. Your celerity in uncovering PFM issues which are relevant to the public is also well known. In this regard, you are known to be guardians of truth and justice. Moreover, you engage with the press and ensure that PFM is constantly kept under scrutiny of the media. You are also enablers of parliamentary democracy since you interact with Parliamentarians and feed them information for parliamentary questions, for debates in the House, or for public hearings and campaigns. The PFM landscape is thus incomplete without your diligent work and input. Your contributions as CSOs to furnish reports for country evaluations relating to democracy and governance indices for Africa are notable contributions which have ensured that the information garnered is balanced, and show the progress made as well as challenges in an unbiased and fair manner.

I would also like to salute the commendable work performed by CSOs who are involved in sensitisation campaigns on PFM. Some CSOs have conducted tremendously effective work in ensuring that communities in Africa understand the budgeting process,the basics of corruption, and the PFM processes of the State, a knowledge which would otherwise remain completely unknown and far from reach for the layman. It is trite that sensitisation campaigns on aspects of PFM which pertain to the bribery of public officials and fraud are of paramount importance if we are one day to rid the region of such malpractices that are abhorrent to good governance.

Today, we expect that as prominent CSOs of the region, you engage openly and frankly with the legal drafter and Rapporteurs on the provisions of the PFM Model law which are of interest to you. For instance, you may consider Part V on parliamentary control which provides for avenues and possibilities for MPs to engage with a number of stakeholders during Committee sittings, including CSOs. In addition, you may wish to consider the Offences section under Part 11 which deal with particular PFM offences such as maladministration and financial irregularities and discuss their appropriateness. In addition, you will equally be interested in Part IV which deal with the Appropriation of funds by Government through the budgeting process.

Section 60 relating to the SDG Budget statement and section 61 on the International Commitment statement will also assist you in holding the Government accountable on commitments taken and treaties ratified. Indeed, for the first time, the Budget document will need to be explicit about how budget lines are assisting to implement concretely the SDGs and other international commitments such as those in gender related treaties and covenants.

In terms of the way forward, I wish to mention that CSOs will be directly involved in the domestication process of the SADC Model Law on PFM since CSOs as private stakeholders will be entrusted with the crucial role of providing shadow reports to the Regional Parliamentary Model Laws Oversight Committee (RPMLOC), which is the dedicated Forum organ to monitor domestication.

In this respect, CSOs may be called upon to work together with other stakeholders such as prosecutors, AML/CFT agencies to provide shadow reports on the observance of PFM provisions contained in the Model Law. For CSOs who are interfacing for the first time with the Forum, you are kindly requested to share your coordinates and your country of origin within SADC so that we may get in touch with domestication initiatives when same are operationalised through the Oversight Committee.

Without doubt, PFM issues in Southern Africa will not be resolved in a fortnight. Consistent sensitisation and advocacy will be required by CSOs to make the SADC region become a financial hub that is effervescent with robust PFM systems in each Member State.

CSOs will surely concur that without a strong PFM framework, the prospect of good governance remains dismal. Absence of good governance will in turn lead to corruption, fraud and abusive practices. There is thus a need to elevate PFM as a stepping stone with the aim to attain a true and functioning democracy where citizens live in freedom and reap the resources of the State with fairness and merit. We have no doubt that CSOs will assist the Forum in that noble and promising endeavour for a better and more equitable Southern Africa.

On this note, I wish you a pleasant session.

STATEMENT BY THE SECRETARY GENERAL DURING STAKEHOLDER CONSULTATIONS FOR THE SADC MODEL LAW ON PUBLIC FINANCIAL MANAGEMENT, WITH CIVIL SOCIETY ORGANISATIONS (CSO)