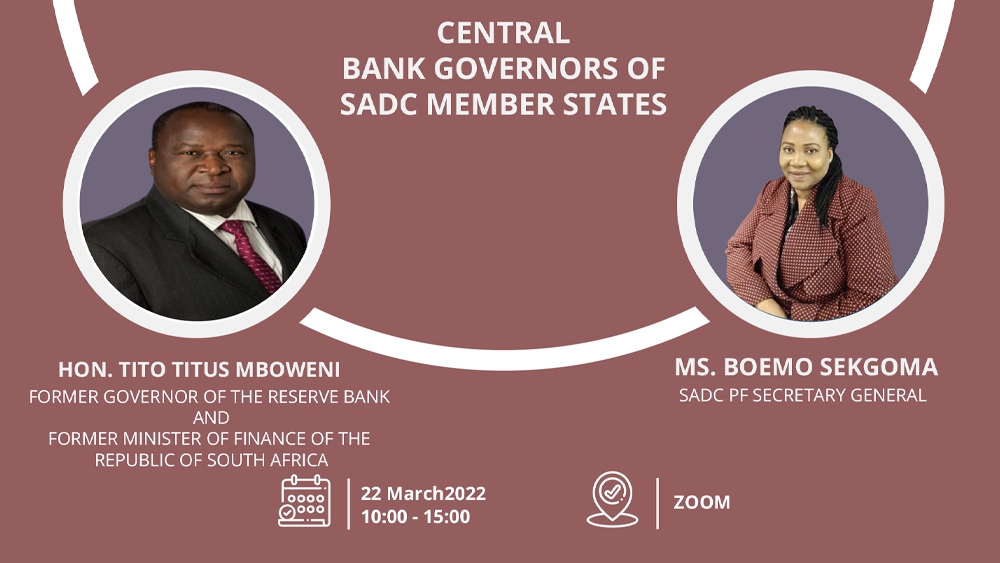 It is with a unique sense of pleasure that I welcome the Committee of Central Bank Governors of the SADC as well as representatives from central banks to this landmark consultative session organised under the auspices of the SADC-PF.

Thank you for carving time out of your busy schedules to attend this event, especially as we are aware that central banks of the SADC are actively working for SADC Member States to climb back the steep economic slope in the trail of the COVID-19 pandemic.

For those who are interacting with the Forum for the first time, I wish to say a few words about the SADC-PF. The SADC-PF is the parliamentary arm of the SADC institutional framework and has a clear vision to act as the Flag-Bearer of Democratisation and Socio-Economic Development for Southern Africa. In this regard, it is mandated to adopt Model Laws which stand as guiding legislative benchmarks for the SADC Member Parliaments whilst they advance their social and economic agenda at national level.

I wish to emphasize that Model law-making is a proper legislative process at regional level since Model Laws are adopted by Parliamentarians from SADC Member States who are themselves democratically elected through universal suffrage. Although Model Laws are non-binding, they have a high standard of persuasive authority. Already, we have concrete legislative examples how Model Laws have helped to support and shape the drafting of domestic legislation, especially in the field of HIV, Sexual and Reproductive Health Rights, Child Marriage, and Elections, which are flagship themes dealt with by Model Laws.

We are thus elated to make advancements on Public Financial Management (PFM) which is a theme that directly affects economic growth, gross domestic product, the budget deficit, and other economic variables which are best known to bankers of the central bank. Without the regulation of PFM, it would be difficult for the SADC region to find its way out of the economic impasse left in the post-pandemic period, and whilst the region was already beset with economic turmoil after the subprime and eurozone crisis affected financial flows towards the region in the last decade.

Since the Forum has already consulted with the stakeholders in the non-banking sector including the SADC Ministries of Finance, AML/CFT agencies, prosecutors and the police, as well as judicial officers and Magistrates, it was thus necessary to consult with representatives of central banks in view of completing the circle of stakeholders involved in the financial landscape.

The Forum firmly believes that central banks are directly concerned with Public Financial Management. The Forum is cognisant that the financial landscape is divided between the banking and the non-banking sector, and that banking business is very dependent on the state of the economy.

Central banks are at the centre-stage of determinations relating to price stability, the repo rate, monetary policy, the issue of bank notes, inflation, to cite but a few themes of concern. In addition, central banks are also bestowed with the mandate to licence commercial banks and in this regard they determine prudential ratios related to borrowing and mortgages.  Furthermore, central banks also manage credit information of banking consumers and regulate the confidentiality of the banking sector.

The central bank also holds the deposit accounts of Government and is generally regarded as the main banker of Government funds, as well as parastatal bodies. It goes without saying that central banks constitute a pillar for the economic health of every nation.

The Forum is also aware that part of PFM policy concerns Ministries of Finance and part of it concerns central banks which are vested with a sacrosanct independence under the law. The Forum pays tribute to this independence which for decades has contributed to the stability of SADC economies and has ensured that our geographical region remains a global player at the financial and economic level.

III. Expectations from the audience

Today, we kindly expect that you advise us on the provisions of the Model Law from the perspective of central bank policy.

We are mindful that PFM has certain linkages with central bank policy, especially concerning the issue of new type of currencies such as cryptocurrencies, and the consideration of the debt ceiling.  You are thus kindly requested to consider all provisions of the Model Law as bankers, but additionally you may wish to focus on Part 7 on Government borrowing and the debt ceiling, and Part 11 on the issue of cryptocurrencies.

In this regard, you are encouraged to engage openly and frankly with the legal drafter and rapporteurs on the appropriateness of the provisions of the Model Law and to advise accordingly.

We are well aware that the independence of the central bank also means that the central bank does not interfere with the Executive on the enactment of PFM laws and regulations. Still, we believe that central banks may have a role in domestication of the SADC Model Law on PFM when consultations are undertaken thereon by the Ministry of Finance and relevant departments. Representatives of central banks may thus voice out best banking practices at regional and international level, as espoused by the Model Law, and advocate for their domestication through progressive legislation to be enacted in Parliament.

In addition, representatives of central banks will have the regular opportunity to interact with the Regional Parliamentary Model Laws Oversight Committee (RPMLOC) which as the name indicates, is the organ of the Forum dedicated to overseeing the progress made in domestication of Model Laws and related SADC-PF policies.

There will thus be ample occasion for representatives of central banks to submit progress reports to the Committee and to identify areas for improvement as far as banking law is concerned within the context of PFM.

The Forum firmly believes in the fundamental role played by central banks not only across SADC but around the world. The central bank of every country represents a noble icon of monetary and financial stability which shines by its independence and fairness in handling financial and economic issues that pertain to banking business. They represent the coffers of the State and they are full partakers in the PFM framework. In this respect, central banks contribute to a large extent to democratisation and socio-economic development which accords fully with the objectives of the Forum and that of other organisations such as the African Union and the African Development Bank. Together, we can hope for a better Africa that responds to the Sustainable Development Goals (SDGs) and to Africa Agenda 2063.

To conclude, I will thus make an appeal to representatives of central banks to continue considering the Forum as a working partner in view of achieving mutually beneficial objectives which relate to the economic prosperity of the SADC region.

On this note, I thank you for your kind attention and I wish you a pleasant session.

More in this category: « STATEMENT BY THE SECRETARY GENERAL DURING STAKEHOLDER CONSULTATIONS FOR THE SADC MODEL LAW ON PUBLIC FINANCIAL MANAGEMENT, WITH CIVIL SOCIETY ORGANISATIONS (CSOS)
back to top