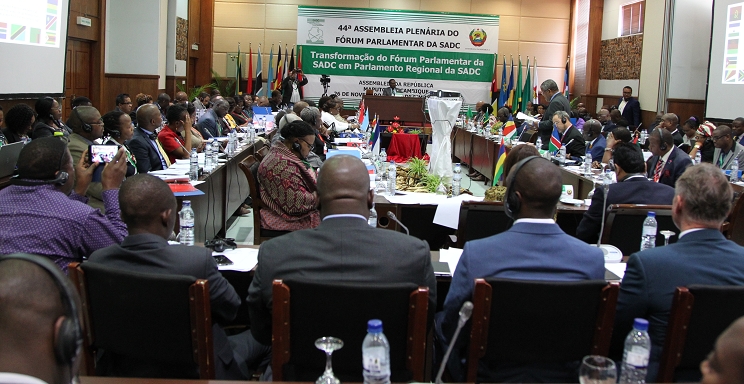 On what has been hailed as a great day and a milestone for the SADC Region, the Plenary Assembly Session of the SADC Parliamentary Forum last week adopted the first ever SADC Model Law on Election.

The Chairperson of the SADC PF's Standing Committee on Democratisation, Governance and Human Rights Hon Wavel Ramkalawan from Seychelles, moved for the adoption. He argued that the new Model Law is a "very relevant tool that would assist SADC Member States to incorporate provisions of the revised SADC Principles and Guidelines Governing Democratic Elections and other regional and international election instruments into national legislation and policy".

The Plenary complied and passed the soft law.

In an interview, Ms. Boemo Sekgoma, the Acting Secretary General of the SADC PF said the unanimous adoption of the Model Law on Elections by the region's parliamentarians who themselves are products of elections, was significant.

"They are the same people mandated with the responsibility of ratifying regional and international election instruments so that they are incorporated and implemented at national level," she said.

She said often when observer missions make recommendations, a number of them relate to the need to review the legal framework governing the management of elections.

The SADC PF has been associated with the election process in the SADC Region since 1999. When in 2001 when the Forum adopted Norms and Standards for Elections in the SADC Region, it became the first such instrument in SADC and on the African continent.

"The development and adoption of the Model Law marks another milestone but more importantly is a progressive effort by Parliamentarians to help the Member States to continuously improve the management of elections. This is consistent with election observation mandates where whenever we observe elections we end with recommendations on areas that require improvement," Sekgoma said.

She explained that the SADC Model Law on Elections important, also, because it is an instrument being developed by Parliamentarians to operationalise the provisions of the revised SADC Principles and Guidelines Governing Democratic Elections.

"Normative standards for elections imply common standards and also imply a common approach by the Member States. Against a background where our legislative frameworks are rooted in different legal systems and history, the Model Law becomes a tool that helps the Member States to easily harmonise consistently with regional integration objectives," she said

Sekgoma said the realization of the gap between policy and practice had necessitated the Model Law on Elections.

"We do not have a problem of instruments. We have a problem with gaps in implementation. So for the Member States when they want to operationalise what have become not just norms and standards, but obligations, the challenge are always: how do you filter down these obligations, provisions, principles, and guidelines to be reflected in the National Legislative Framework?"

She said by adopting this Model Law, Parliamentarians were facilitating facilitate a process they have already started through election observation where they have made recommendations to close certain gaps.

"The Model Law also brings in a very comprehensive approach because it is anchored on the election cycle. So it covers virtually anything and everything related to elections in terms of what the Member States are required to do within that cycle of five years during the pre-election, the election phase, and post-election phase including the requirement for audits, and all that goes with it."

In developing this Model Law, the SADC PF worked closely with the SADC Electoral Advisory Council and election management bodies under the auspices of the Electoral Commissions Forum of SADC countries (ECF SADC.) Electoral Management Boards (EMBs) have the sole mandate of organising elections.

Experts say a Model Law must be developed in such a manner that it has so much commonality that it can be easily adopted or adapted by the Member States as they develop their own national laws and policies.

Accordingly, the new Model Law seeks to operationalise obligations already existing. Although not binding Model Laws bring in the flexibility that recognises that Member Stats are at varying stages and therefore each different country will adopt and adapt different components depending on the gaps that exist.

With the Model Law on Elections now adopted, Sekgoma said the SADC PF would now focus their efforts on operationalisation; the engaging SADC Member States based on the election calendar.

The revised SADC Principles and Guidelines require the Member States to engage in an all stakeholder post-election evaluation where they take an audit of what happened and where gaps are.

In the short term, SADC PF would finalise the process of editing and translation in line with the SADC PF language policy that incorporates three languages that reflect the linguistic and historic diversity of the region.

Expectations are that the new Model Law would give impetus to ongoing calls to make elections accessible to the people and a means to more democratization and more development that brings practical benefits and improvements in the lives of the people.