MASERU- The Mountain Kingdom of Lesotho will soon begin a process of reviewing and where necessary, reforming national laws and policies as the country takes bold steps to ensure greater access to Sexual and Reproductive Health Rights, HIV and AIDS services for all her citizens.

Recent outreach and oversight missions to various health and correctional facilities in parts of Lesotho by Members of Parliament and Senators exposed gaps in the country’s SRHR, HIV and AIDS response which were negatively affecting some citizens, especially key populations.

The MPs and Senators who belong to the Social Cluster, HIV and AIDS and Sustainable Development Goals (SDGs) Committees in the National Assembly, met various people including sex workers and members of the LGBTI community. They then compiled reports which they shared during unprecedented roundtable discussions with Cabinet Ministers and Permanent Secretaries of relevant line government Ministries here last week.

In impassioned submissions, the lawmakers implored the Ministers to take decisive steps to ensure that the rights of all citizens including key populations were upheld so that universal access to SRHR, HIV and AIDS services becomes a reality.

The Minister of Justice, Human Rights and Correctional Services, Hon Mokhele Moletsane, one of the Ministers that received the reports, immediately took heed and promised action.

In an exclusive interview, the Minister commended the lawmakers for undertaking the oversight missions and for sharing their findings.

“This has been a very useful and important gathering where, as Ministers, MPs, Non-Governmental Organisations and government officials we interacted on very important issues of HIV and AIDS in relation to the so-called key populations,” he said.

He added that the meeting had enabled stakeholders to better appreciate the work that the SADC Parliamentary Forum was doing in responding to the global HIV and AIDS epidemic under the SRHR, HIV and AIDS Governance Project that Sweden and Norway are funding in seven SADC Member States including Lesotho.

“The invitation by the Portfolio Committee to Ministries that are directly working with Key Populations (the Ministry of Justice, Human Rights and Correctional Services which deals with safe custody of inmates; Ministry of Gender; the Ministry of Health; and the Ministry of Social Development which is the custodian of vulnerable people) was well thought-out.”

He said the reports shared by the MPs and Senators had enabled him to better appreciate “the peculiar needs of prisoners, women and men who form a substantial part of the population in our prisons.”

Pressed on what needs to be done going forward, Hon Moletsane was clear.

“We should now embark on a rigorous transformation of our legal framework. We must come up with new laws to cater for key populations. We need new policies. Parliamentarians should embark on that rigorous reform to cater also for the needs of special groups within our institutions.”

Hon Moletsane expressed optimism that the Social Cluster and Parliamentary Committee on HIV and AIDS would help the Government of Lesotho to develop laws and policies “to take care of everybody.”

He said as a follow up, he would invite all relevant stakeholders to his Ministry “so that we embark on a review of any piece of legislation that needs to be repealed or amended so that we realise the rights of every citizen, especially prison inmates.”

Asked what had struck him the most from the reports shared by the lawmakers, Hon Molestane first took a deep breath before saying: “The realities in our communities and the level of our ignorance as a society. We know gay people exist, but we have never taken time to understand their special situation and their special needs.”

He said what the lawmakers reported following their interactions with different members of the community including key populations warranted the full attention of the Executive and Parliament.

“We need to respond to these challenges, whether through the national budget or legal reforms. We can no longer ignore or pretend that these (key populations) do not exist. We have to act,” he said. 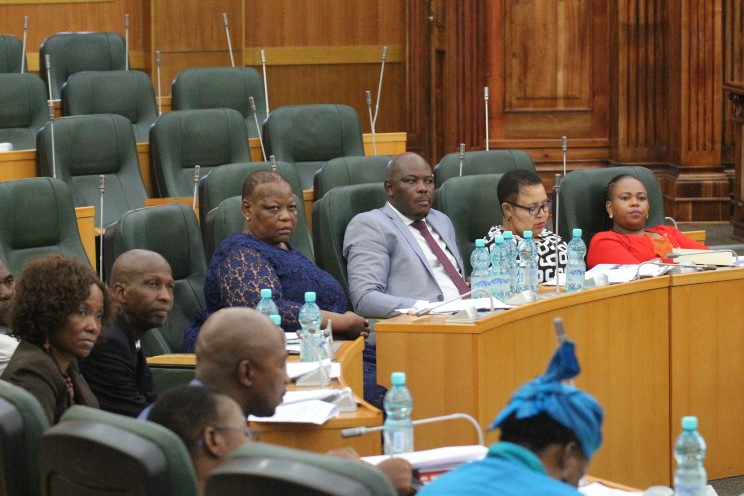 He commended the MPs and Senators for throwing light on matters that for long had been skirted.

“They are determined to work and enlighten us. When it is done at this high level of governance, it says a lot. Parliament is taking its mandate seriously.”

He said Lesotho was going through exciting times towards universal access to SRHR, HIV and AIDS services. He called for all hands on board.

“Let us join hands and look into the future so that we can celebrate being part of that change. As an individual and as an official of government, I am determined … to be part of those willing to bring about change,” he said.

Hon Moletsane said he was keenly alive to the challenges that lay ahead.

“It is not going to be easy. We are a religious community but I am going to add my voice to numerous voices that are already advocating for change.”

He said he would instruct officials in his Ministry to engage all stakeholders to be part of the envisaged transformation. He commended the SADC PF for building the capacity of MPs to advocate for universal access to SRHR, HIV and AIDS services and said enlightened lawmakers can make a huge difference.

“The importance of MPs cannot be over-emphasized. If MPs have a better appreciation of the needs of special populations, it would be very easy for us to work with them to respond to these challenges. People look up to us as leaders to wisely legislate to empower them.”