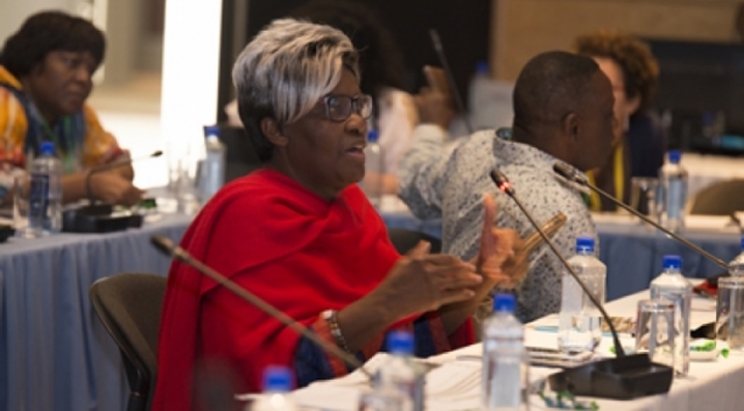 The resolutions are addressed specifically to the SADC Parliamentary Forum. They are meant, also to the SADC Secretariat, SADC National Parliaments and relevant Ministries of Member States for implementation. In that regard, the Mahe Declaration is a commitment by Women, Members of Parliament to address issues that predispose the region's women and girls to HIV infection.

It has since been referred to the Plenary Assembly Session of SADC PF - which is currently meeting in Mahe, Seychelles - for adoption.

In separate interviews, various Members of Parliament hailed the Women's Parliament and the Mahe Declaration as giant steps forward in addressing HIV infection among women and girls but warned against complacency.

"When you are discussing such serious issues as we are discussing, it is important to allocate sufficient time so that people exhaust issues. It is better to reduce the number of panelists during panel discussions and increase their time," Luo said.

Time constraints notwithstanding, the veteran politician said the Women's Parliament had been an important attempt at further interrogating the HIV and young people.

"Some of us knew as far back as 1989 that HIV was not only a serious problem, but that it (disproportionately) affected women. Disaggregated data shows that HIV affects young people the worst."

Nothing that in some instances people had for long been paying lip service to HIV, Luo hoped that she would begin to see less "talk and more action". Her view was, also, that because of limited time, the Women's Parliament had "merely scratched" the surfaces of some pertinent issues.

"We did not adequately discuss why HIV affects young girls and young women. We need to move away from symptoms to social determinants. What is it that is so peculiar to our society in the SADC Region that is promoting such high infections?"

She had a theory: "We are the region of Africa that is running away very fast from its identity and taking on a lot of influence from outside. While it is appreciated that we have to be in tandem with everybody else, we need to preserve our identity."

She said the youths in the SADC Region were being exposed to drugs, alcohol abuse and sexual relationships at a very tender age.

"These are not our traditional cultures and norms. In the past traditionally, African Societies respected women and young girls were never exposed to boys or men. We were taught as children to fear and avoid boys, so this thing of having boyfriends and girlfriends was not part of our culture," she said.

Going forward, Luo said SADC Member States should come up with "practical things" to respond to the issues raised in the Mahe Declaration. Many People at the Women's Parliament called for it to become an annual event. Luo agrees, but wants Member States to work throughout the coming year so that the next Women's Parliament becomes an opportunity to report on activities and their impact.

"For the women in the SADC Region, this is the beginning of recognition of women as a force. We galvanized ourselves. The topics that we discussed are prominent; gender based violence, access to safe abortions, etc."

She said in some parts of the SADC Region Civil Society Organizations had been left to respond to respond to the HIV epidemic alone when MP's should be at the forefront.

"We should take the lead and only turn to CSOs for technical support."

She suggested that the organizers consider inviting more young people to such gatherings so that they share their lived experiences.

"We must meet often and for longer periods with like-minded people and organizations. We need to follow up on issues raised here in our countries."

Her wish was to see people from hard to reach populations like sex workers at similar gatherings to say what drove them into where they are or who they are. She recalled listening to a sex worker explaining how she had undergone five abortions due to attitudinal and other barriers.

"That is what I want to hear. We must have safe abortions."

She advised SADC PF and its partners to think about building on the first Women's Parliament.

"Hold on to this thing. This will lift the SADC Region beyond other regional."

Namibian MP Petrina Haingura said the Women's Parliament had lived up to her expectations.

"I came here to gain knowledge so that I share it with my fellow Parliamentarians and especially young rural women and girls on SRHR," she said.

She said in the SADC Region and in her home country, teenage pregnancies and Gender Based Violence were big challenges.

"(Teenagers) are dumping babies like nobody's business and GBV is a problem. I wanted to know what we can do. We have many good laws in place. The problem, it seems to me, is implementation."