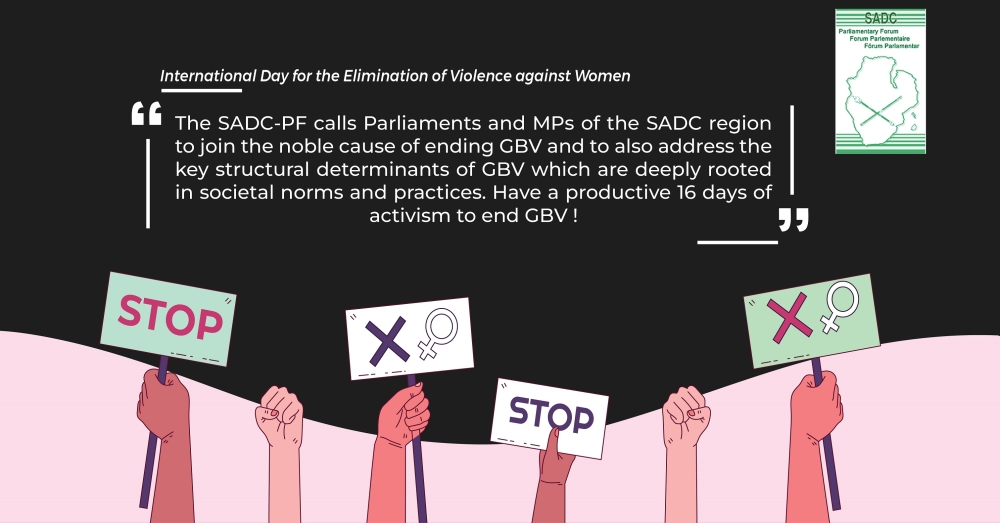 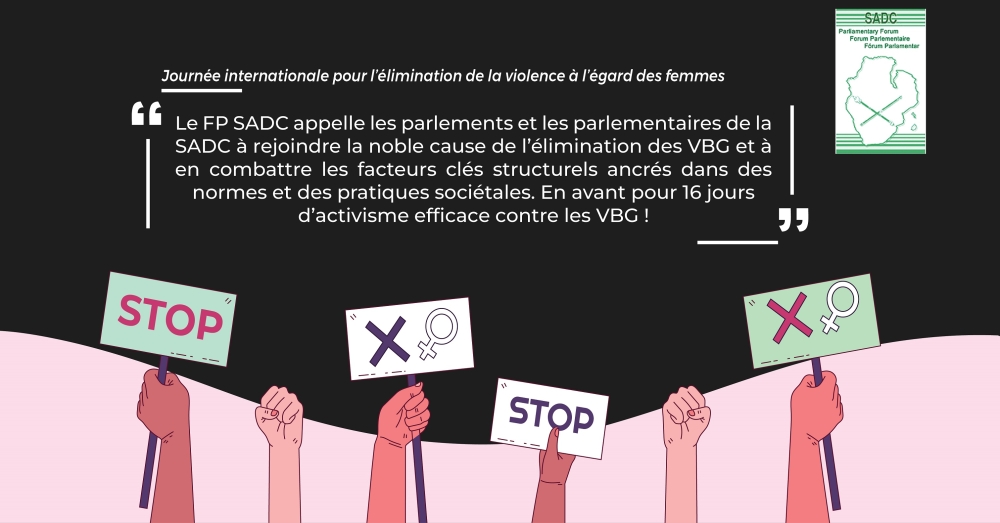 The SADC Parliamentary Forum Standing Committees will hold virtual public hearings on various issues of regional interest and concern from 25th to 28th November 2022 under the theme “CONSOLIDATING DEMOCRACY BY BRINGING PARLIAMENT TO THE PEOPLE.”

Whilst public hearings constitute a tool used by Parliaments at national level to promote public interaction on Bills or issues which may potentially constitute a legislative instrument, the Forum acting through its organs, wishes to interface directly with SADC citizens so that they can contribute directly to decision-making processes on thematic committees. In line with the objective of the Forum to promote participatory democracy through its Committee deliberations, the Forum invites members of the public or their representative organisations to appear on the floor of the SADC-PF Committees virtually to give an oral account of their concerns and grievances within the remit of the legislative, budgetary, oversight or representative functions of parliaments. Members of the public may also submit their comprehensive statements in writing to the Forum after they have given their oral account in abridged version.

SADC citizens and civil society organisations are therefore, invited to participate in public hearings in view of making their oral statements to the different Standing Committees based on the thematic issues of focus as shown in the table below. Based on their requests, citizens will be allocated time to make formal presentations to the relevant Standing Committee.

Statements should focus on sharing experiences and making recommendations on concrete actions that Parliamentarians may take to influence legislative, oversight and budget and policy changes in view of improving the standard of living and quality of lives for SADC citizens.

Theme : “CONSOLIDATING DEMOCRACY BY BRINGING PARLIAMENT TO THE PEOPLE.”

Theme : “CONSOLIDATING DEMOCRACY BY BRINGING PARLIAMENT TO THE PEOPLE.”

It is with undivided pleasure that I join you online in my capacity as Secretary General of the SADC Parliamentary Forum, on this august occasion, to both welcome and launch the report of the African Goodwill Ambassador on Ending Child Marriage.

At the onset, I wish to express solidarity with the African Goodwill Ambassador, Ms Nyaradzai Gumbonzvanda, who has been a beacon of light in the field of eradicating child marriages on the African continent and beyond since her appointment.
Ms Gumbonzvanda is a staunch partner of the SADC Parliamentary Forum and her contributions to the Forum's thematic committees to unpack strategies to eradicate child marriages are highly commendable. In the same vein, I also wish to thank the Rozaria Memorial Trust for contributing to this event which is of paramount important to the ending child marriage discourse.

As you may be aware, the eradication of child marriage in Africa has been a longstanding battle.

For recall, Eastern and Southern Africa is amongst the regions with the highest prevalence of child marriage in the world, with over 30 percent of women aged 20-24 years who were first married or in a union under the age of 18, whilst the global average stands at around 19%.

Indeed, the Forum and other partners including the AU Goodwill Ambassador have been assiduously working over the past years to end child marriages by upscaling laws, budgets, and oversight activities which could mitigate or altogether eliminate child marriage, whether in urban or rural settings.

Furthermore, the Forum considers that child marriage is interlinked with several contraventions of human rights, including the right to physical integrity, the right to health, the right to education as well as the right to be free from any torture or inhuman and degrading treatment.

At the end of the day, child marriage is a practice which goes against contemporary societal norms and principles and it is a repressive practice that disproportionately affects young girls. In addition, child marriage leads to other pernicious issues such as unintended or forced pregnancies, unsafe abortion, school dropouts, early and unprepared motherhood, to cite but a few repercussions.

As well highlighted in the Report, child marriage is an issue which cannot be looked at in isolation, but must be considered in a comprehensive manner, with the dire consequences of child marriage always going beyond the scope of mere matrimonial links.

In Southern Africa, the Forum notes the progress made in Zimbabwe with the passing of the Marriage Act, and in Mauritius with the enactment and proclamation of the Children's Act, the latter being in operative force since January 2022. Both progressive legislations prohibit child marriages and ensure that the legal age for marriage is fixed at 18, which also coincides with the age of adulthood. The penalty for not complying with such legal provisions is an offence which is of criminal nature. Yet, while progress has been made in certain areas in Africa regarding laws to prohibit child marriage, there is room for improvement and a lot remains to be done, as highlighted in the Report.

An observation made at the Forum is that with the COVID-19 pandemic and the recent inflationary rise in the cost of living, there were instances where Governments could not prioritise issues such as gender inequality and child marriage, even if those issues were equally important to preserve the social fabric.

There is thus a need for reprioritization of agendas and the Report launched today will be an enormous value addition to revive the momentum in that direction.

In this juncture, I wish to also encourage participants and stakeholders present to continue collaborating with the Forum in our initiatives to domesticate the SADC Model Law on Child Marriage which was adopted by the Plenary Assembly of the Forum in 2016. To date, the Model Law is in process of domestication and it has served as guiding benchmark to prohibit child marriages in several SADC countries already.

The Model Law clearly calls for the eradication of child marriage and child betrothals and the protection of children already in marriage. Under the Model Law, Member States are to fix the legal age of marriage at 18 years old, whether civil or religious marriages, and to ensure that there is a free and informed consent at the time of marriage.

The Model Law on Child Marriage also attempts to plug in other loopholes which relate to the rights of the child such as the right to education and to equal protection under the law, and in this respect has benchmarked on existing regional instruments such as the African Charter on the Rights of the Child.

Furthermore, the Model Law also provides for the creation of special budgetary provisions to combat child marriage, including an anti-child marriage fund which authorities can tap into to sponsor regular sensitisation campaigns in view of ending child marriages.

As we gather here today, the SADC Model Law on Child Marriage is still an effective tool for domestication of legal and administrative norms to eradicate child marriage, and has proved its influence to accelerate domestication endeavours on several occasions.

At the Forum, we recommend that the Model Law should be domesticated in conjunction with the wise guidance and recommendations of our like-minded partners, including those contained in the report of the African Goodwill Ambassador.

I wish to end by stating that the Report is a live document which should be used consistently for policy engagements. In this regard, I invite partners to join the public hearings that are scheduled from the 25th to the 29th of November, 2022 virtually, to make representations before your regional MP's, It is understood that elected representatives must continually interact with their constituents over the elected period, failing which there will be an asymmetry between citizen's wishes and parliamentary action. Email for submission is , refer to attached programme.

Let us continue actively engaging with MPs through the Forum and with national Parliaments so that the findings of the Report are not put to rest, but are made actionable and are promptly implemented.

Parliaments are agents of change, and citizens elect their representatives to support the change that they want to see. Regular feedback from the citizenry on the changes they want to see to eradicate child marriage is thus important and in line with the principles of participatory democracy.

With these words, I thank you all for your kind attention.

It is with immense pleasure that I release this statement to the Forum’s distinguished Member Parliaments and partners in view of celebrating the International Day of Girl Child on this 11th October 2022.

TRIBUTE ON CHANGE OF PARLIAMENTARY LEADERSHIP IN ANGOLA