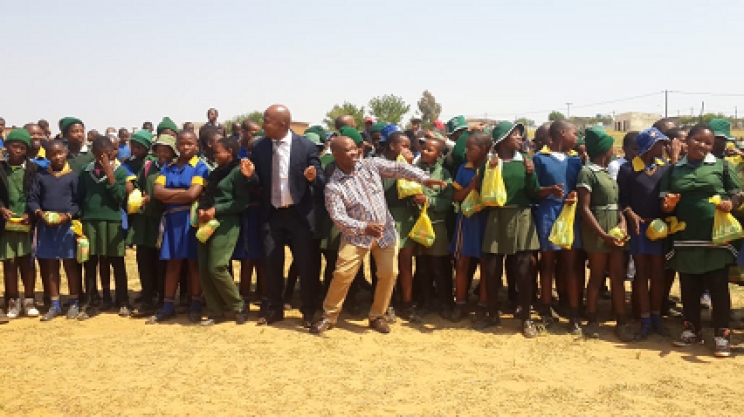 The Member of Parliament for Berea 27 Constituency Honourable Motlatsi Maqulepo recently collaborated with a businessman who runs taxis in Maseru to donate shoes and sanitary towels to needy children.

Under this collaboration, the businessman, Mr. Mphethe Morakabi provided 69 pairs of shoes which Hon. Maqelepo distributed to needy children who attend Thuathe Primary School and Lancers Gap Primary School, which are located in Sehlabenga sa Thuathe.

Hon. Maquelepo took this opportunity to distribute sanitary towels to over 70 pupils who had already started having their menstrual periods. Before distributing the sanitary towels, the MP addressed the learners at the schools who included boys and encouraged them to accept menstruation as a normal part of any girl’s development.

He, however, noted that many school-going girls do not go to school when they are having their periods if they do not have proper sanitary towels for fear of embarrassment, should they accidentally soil their skirts.

Noting that in some cultures some people regard girls having their menstrual periods as a sign of sexual maturity and said this has had resulted in many children getting married before they were physically and mentally prepared for marriage. 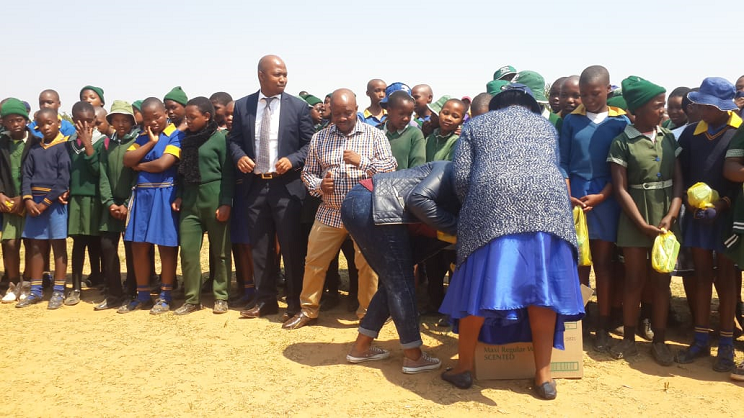 He explained that girls who fall pregnant while they are still young were at a greater risk of experiencing pregnancy-related complications and said all over the world, many girls who fell pregnant when they are young die while giving birth. Additionally, Hon. Maqelepo explained that early pregnancy disturbs girls’ formal education, making it almost impossible for them to acquire a sound education that can enable them to land good-paying jobs.

The MP stressed the fact that education was the gateway to a good life and encouraged girls and boys to remain in school and to work hard.

The lawmaker is a member of the Human and Social Development and Special Programmes of the SADC Parliamentary Forum. Under this programme, he has actively supported the implementation of a Sexual and Reproductive Health Rights (SRHR), HIV and AIDS Governance Project which the SADC PF has been implementing in seven SADC Member States including Lesotho, with funding from the Swedish Embassy based in Lusaka, Zambia.

The first phase of this Project, which began in 2014, ended in March 2018. It sought to build the capacity of female Members of Parliament in particular and that of National parliaments in general, to advocate for universal access to SRHR, HIV and AIDS services.

The recipients of the shoes and sanitary ware were carefully selected on the basis of their socio-economic status. Many of them are orphans and vulnerable children (OVCs).

Hon. Maqelepo thanked Mr Morakabi for partnering with him. He encouraged other business people and individuals to emulate the businessman in making a difference in the lives of boys and girls.

A lady teacher at Thuathe Primary School commended Hon. Maqelepo and said it was rare for male MPs to be so passionate about SRHR-related issues. She said the MP’s discussion with learners about menstrual health had gone a long way towards demystifying issues related to menstruation. Over the years there have been numerous reports of some girls dropping out of school after being ridiculed for soiling their skirts when they start menstruating without adequate preparation.

Twitter
More in this category: « Hopes hang on new regional anti-child marriage law Needle exchange a must in the fight against HIV/Aids »
back to top