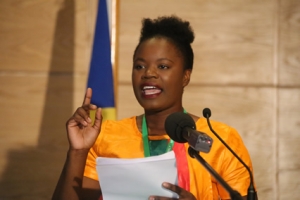 The first ever Women's Parliament got underway in Mahe, Seychelles on 5 July 2017 with strong calls for prevention, age-appropriate sexuality education, more involvement of men and boys, thinking outside the box and focusing on what works in responding to the global HIV epidemic.

The normally serene picturesque Eden Island was a hive of activity as SADC Women Parliamentarians, former Heads of State and Government, representatives of Civil Society Organisations, ordinary women and girls and other delegates gathered to discuss Resolution 60/2 of the United Nations Commission on the Status of Women (UNCSW) to discuss how to stop HIV infections, especially among women and girls.

Zimbabwean lawmaker Monica Mutsvangwa, who is the Vice President of the SADC Parliamentary Forum, officially opened the Women's Parliament and called on Women MPs and their development partners to collaborate in stopping new HIV infections.

"This Women's Parliament is concerned with ending unacceptably high rates of HIV infection among women and girls. As elected representatives of the people, we have the power and the mandate to make a difference in the lives of all people, particularly women and girls. We can achieve this through our various roles and mandates that include representation, advocacy, law making, budgeting, oversight and shaping opinions on a plethora of issues," she said in a rousing speech which called, also, for more use of information communication technology.

Mutsvangwa said greater access to ICT had changed the way communities communicate and socialize their young. She called on MPs to adapt to the ICT revolution. She noted that with many people now "talking with their thumbs", socialisation of young people had been "outsourced to gadgets and social media".

She said in such a scenario, adults and the elderly faced being left behind.

"Let us think about how we can effectively engage with women and girls through the media of their choice. Information is power. Are we reaching our women and girls with information that can empower and protect them?"

Malawian Member of Parliament Dr Jessie Kabwila, the Chair of the Regional Women's Parliamentary Caucus, also spoke during the official opening. She emphasised the critical role women in politics play to ensure that Parliaments are inclusive and take women's needs into consideration.

She called for strategies to increase the number of women Members of Parliament whom she said had the capacity to make a positive difference in the lives of women and girls but lacked the numbers to do more through their legislative mandates.

"The first step in the political empowerment of women is to ensure a critical mass of them is elected to Parliament through an electoral system, proportional representation system where all political parties use 'Zebra' listing," Kabwila said.

She said once women were elected or appointed to Parliament, strategies and structures were necessary to ensure that they were supported.

"Once women are elected to Parliament, what tools are available to promote women's empowerment from within the institution? Issues of women's sexual reproductive health and rights will remain a pipe dream if we don't assist women to get into party politics and ensure that they are empowered to deliver on their mandate."

Kabwila said the objective of the Women's Parliament was to set out a crisp agenda as part of the implementation of Resolution 60/2 and facilitate the overarching objective to tackle the high rate of new infections among young women and adolescent girls in the SADC region.

Seychelles National Assembly Speaker Patrick Pillay officially welcomed the delegates to Seychelles and encouraged them to use the opportunity to forge positive relationships and fruitful engagement.

"We in Seychelles are extremely happy to welcome the SADC PF Family. We hope you will take the opportunity to deliberate on the issues at hand and have exchanges with other Members of Parliament from fellow SADC countries."

Ms. Buumba Malambo, a young Ward Councillor from Zambia, challenged Parliamentarians present to represent "the hidden voices" - women and girls who are living in poverty, forced into marriage with limited access to basic education and health and who lack decision making powers due to patriarchy.

"This is why we are here; to make policies that are going to help these traumatised girls. These are the hidden voices that we must fight for. This is why against all odds I stood as Councillor, entered the harsh patriarchal world of Zambian politics, making me one of two female Councillors in a Council of 16 Councillors."

Malambo also called for good education policies to ensure that young girls have a better chance of moving out of poverty to be able to provide for themselves and their families.

"Education removes the dark cloth of ignorance from a girl child and gives her the opportunity and the light and hope that come from education," Malambo said.

Speaking at the same occasion, Mr Charles Chauvel United Nations Development Programme (UNDP) Team Leader for Inclusive Political Processes with the Bureau of Policy & Program Support, said public representatives have a responsibility to align their activities with a commitment to end HIV and AIDS.

"Parliamentarians through their constitutional responsibilities of law-making, oversight of government activity and representation of the people have a fundamental role to play in ensuring that their procedures in Parliament and outside of it are fit for purpose to achieve the eradication of discriminatory standards and norms [so that we eradicate] HIV and AIDS," Chauvel said.