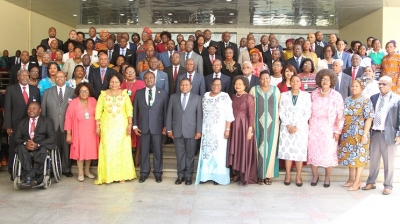 ADIOS: Zimbabwe’s Minister of Information, Publicity and Broadcasting Services, Hon Monica Musvangwa (standing fourth from left) who is the outgoing Vice President of the SADC PF poses with delegates to the 44th Plenary Assembly Session in Maputo, last week. The President of the Republic of Mozambique, Hon. Phillipe Nyusi is standing in the middle of the front row. Mr. Moses Magadza

The Vice President of the SADC Parliamentary Forum, Senator Monica Mutsvangwa left the leadership of the Forum last week after an eventful two years at helm of the inter-parliamentary body that brings together 14 SADC national parliaments.

In a case of history repeating itself and in an emotional farewell speech at the end of the 44th Plenary Assembly Session of SADC PF that took place here, Mutsvangwa bade farewell to the regional body that she served in various capacities for many years.

"I cannot help but feel an oppressive sense of déjà vu … The memories of July 2012 remain etched on my mind as I came here for the 31st Plenary Assembly to bid goodbye and surrender my post as Treasurer of the SADC Parliamentary Forum ... How time flies and yet how history always seems to recur!," she said.

She said she had fond and abiding memories of Maputo, having gone there at the tender age of 15 to be part of Zimbabwe's liberation struggle.

She added: "I grew up here. I was trained here. I served here and now, by a divine twist of fate, it is only befitting that I come back here to bid farewell to my family and friends in the Forum, having served as the Vice- President of the SADC Parliamentary Forum from 2016 up to this day," she said.

Mutsvangwa is now Zimbabwe's Minister of Information, Publicity and Broadcasting Services and said part of her task in the new government "involves repairing, recasting and recreating the image of Zimbabwe in the new dispensation, in line with His Excellency, President Mnangagwa's operative mantra, "Zimbabwe Is Open For Business"."

As Vice President of the SADC PF, Mutsvangwa was a key member of the Executive Committee, the management body of the Forum. The Executive Committee is responsible for the management of the Forum; giving direction to the Secretariat and ensuring that decisions of the Plenary Assembly are implemented. She said serving the regional body in leadership positions had made her a better person.

"Ever since I became a part of the Forum, I have not returned home the same person I was when I came. The Forum, with all its challenges, all its inherent political intrigue and all its successes, has honed my leadership qualities, my person, nay, my entire being …"

She encouraged the SADC PF to be relentless in consolidating the firm foundation of the SADC Region's shared peace, democratic practice and a common pursuit of economic endeavours.

"We owe it to our Southern African heroes, living and deceased, to work together, review our challenges together and celebrate our victories together as a Regional Assembly. The legacy that we should strive to leave behind is a legacy of a united Forum that set aside petty political and ideological differences for the common good of our people."

She said the SADC Region could draw inspiration from luminary characters in in its history who include Tanzania's Julius Kambarage Nyerere, Zambia's Dr. Kenneth Kaunda and Botswana's Seretse Goitsebeng Maphiri Khama and many others, "who taught us, by the evidence of their lives, the content of their character and not the smoothness of their words, that we are better off fighting from one front as Frontline States than a loose conglomeration of disparate entities."

She said the challenge for the Forum is to be transformed into a SADC Regional Parliament but said she was encouraged by progress made towards that goal.

The outgoing Executive Committee came into being at a time when there were key impediments that needed to be dealt with or removed respect to the transformation of SADC PF.

The first related to doubt around the power split between the Council of Ministers of SADC and the proposed SADC Regional Parliament. To overcome this the Executive Committee worked hard to assure the Executive wing of SADC that the proposed SADC Regional Parliament did not plan to take over the sovereignty and power of the Council of Ministers, but to serve Summit and Council.

Another challenge was to show how a SADC Regional Parliament would actually be a resource to Summit and a resource to the Council of Ministers of SADC.

Thanks to oneness of purpose among not just Members of the Executive Committee, but also the generality of the membership of the SADC PF, in August 2018, the issue of the transformation of SADC PF into a Regional Parliament was heard at the 38th SADC Summit of Heads of State and Government for the first time ever.

The issue of transforming SADC PF into a Regional Parliament has now been accepted in principle. All that remains is for National Parliaments and the SADC PF Secretariat to work out the modalities of setting it up.

Said Mutsvangwa: "I leave this Forum assured that our concerted efforts towards the transformation agenda in the past 21 years have not gone to waste.

With change champions such as His Excellency, the President of the Republic of Mozambique, Hon. Phillipe Nyusi, on our side, who has inspired us to dump the word "Forum," I am confident that it is only a matter of when not if we will achieve full transformation."

She pledged to use her proximity to decision -making in Zimbabwe to further the interests of the Forum, including the transformation agenda which Zimbabwe already supports.

The Minister is passionate about gender equality and equity in the SADC Region. She commended the Regional Women's Parliamentary Caucus for successfully lobbying for gender balance in the constitution of delegations to the Forum.

"This has significantly increased the representation of women at the Forum though we are still to achieve the 50/50 gender parity regional target. My clarion call to female Parliamentarians and our male champions is to lobby for legislative measures in our respective countries that entrench gender provisions in the Constitution."

She hailed the women of Zimbabwe for successfully lobbying for a women's quota during the Constitution-making process. She said consequently, women's representation in the Parliament of Zimbabwe increased significantly from 18% in the 7th Parliament to 35% in the 8 th and 9th Parliaments.

Stressing that there was strength in unity, Mutsvangwa said the SADC PF has made remarkable progress in recent years. She cited the increase in women's representation at the Forum; the success of the Sexual and Reproductive Health Rights, HIV and AIDS Governance Project funded by Sweden; and other achievements.

"Our aim should be to create a conducive legislative and policy environment for the disenfranchised and downtrodden women in the Region to be the best women that they can be. That should define our success. That is the legacy that as female legislators we should imprint on the hearts of the women whose sacred trust has been bestowed on us."

She said the SADC Region still faced challenges which, however, are not insurmountable. Such challenges are in social development, economics, trade, education, health, defence, security other areas.

"It is clear that these challenges cannot be tackled effectively by individual Members but through our collective effort as a region. We need now, more than ever, to come together, keep together and work together to ensure that we steer the region towards a mutually beneficial course of action that leaves no one behind," she said.

She thanked all who supported her during her tenure, but singled out SADC PF outgoing President Hon. Fernando da Piedade Dias Dos Santos who is also the Speaker of the National Assembly of Angola, and the Speaker of the Parliament of Zimbabwe, Hon. Advocate Jacob Francis Mudenda. She said Mudenda's passion for the realisation of the transformation of the Forum into a SADC Regional Parliament "is enduring and indefatigable".